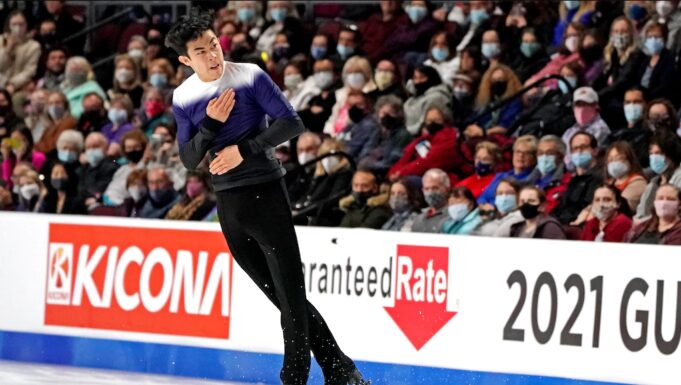 A committee will then name 16 athletes to the Olympic team no later than Monday, January 10th.

All the action from the Bridgestone Arena in Nashville, Tennessee can be seen LIVE on the networks of NBC and streamed on NBCOlympics.com.

The Championships are not Olympic Trials: A skater’s performance does not automatically qualify (or disqualify) him or her to represent Team USA at the Games.

Olympic berths are designated based on performances from all major competitions dating back to the 2021 Nationals.

Three berths are available for each discipline with the exception of pairs, for which the U.S. earned only two spots.

As Olympic veterans like ice dancers Madison Chock/Evan Bates and Madison Hubbell/Zachary Donohue impress with their latest routines, fresh faces such as 16-year-old Alysa Liu will showcase the future of U.S. figure skating by flipping, looping, and Lutzing to the best of their abilities.

However, all eyes will undoubtedly be on world No. 3 skater Nathan Chen, widely considered a gold medal contender at the 2022 Winter Olympics.

He seeks redemption after a slippery short program performance at PyeongChang 2018 sunk his shot at a singles medal.

But to compete at the upcoming Games, Chen must first excel at nationals. He is just one of many talented skaters to watch next week – and, possibly, this February.